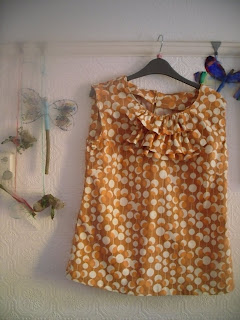 This top has taken me almost two months to sew - not because it is esepcially tricky but because it was so hard to find the time. I made it as a birthday gift for my friend and so worked to a higher standard of finish than I probably would have done if it was for me!
I bought the Amy Butler fabric at the Quilts UK expo at the NEC in August. All I can say now is."Phew..."

Next challenge is to post it before the postal strike. This is more of a challenge as my daughter currently refuses her pram and insists on walking to the local post office. She also refuses hand holding. Problem is we have a major building site at the end of our road and a burgeoning tesco store with heavy traffic. I have to bribe her into the pram with food. She can (and does) climb out once strapped in - when the food runs out!

The surrounding dragonflies were made by the kids at Apple Day(http://greenwoodcentre.org.uk/). More on that later.
Posted by Minnado at 00:35