﻿ ﻿
Bleary eyed and fueled by a strong coffee, I have been each month since May to a once monthly village car boot early on a sunday morning (as in 7.45am).  Now they are finished again for another year.  I didn't find my dream car boot find of a dressmakers' dummy, but I did get quite a lot of useful things.  I am going to have to divide the finds into two posts. The final car boot had sunshine so there were more stalls.  ﻿﻿﻿﻿﻿

And that meant the lady with tins of buttons was finally there. I also bought a couple of zips from her.
﻿﻿﻿﻿ ﻿﻿﻿﻿

Other items include a fat unopened packet of A4 card, a small wicker suitcase for holding dollies, some sleepsuits for Rocket Girl, and a snowsuit for next winter, a dvd for T.    More pictures in part 2.

Finally, for the unrelated stuff, look at this junkyard below. 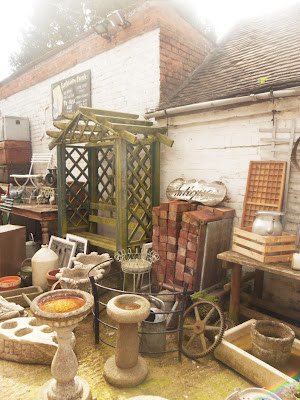 Yesterday morning, I was waiting to get a last minute haircut* and decided to look at the local antiques centre.  The owners had closed up for the day and gone to play golf! But this is what was outside....worth a return trip I think.  I am curious to see what is inside the warehouse. 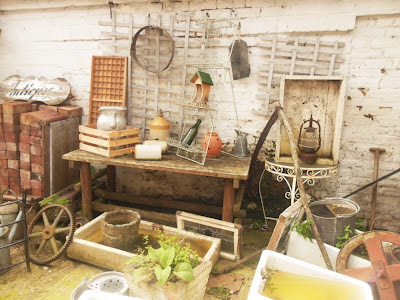 * It was the last day of term, suddenly a haircut before the children are on holiday seemed imperative.  Much more important than food shopping....I bought eggs from the farm...so now the fridge has eggs, yoghurt and um, not much else.
Posted by Minnado at 18:18 6 comments: Links to this post

I sor the queen

Hello.  I haven't had much to blog about recently or much time to get on the computer.  My sewing is piled up but I never seem to get a chance to do any.  So, I seem to spend my time doing laundry, food shopping, cooking, and fruitlessly tidying up.  Then I have to do it all again.  I recently let both kids have a friend home for tea after school - the first time they both had a friend at the same time.  It was good, though those five year old girls had me hard at work!  They did so much enthusiastic pink and yellow painting at the table that I had to serve their food picnic style on the living room floor.  T's friend, who comes from a very clean and well ordered house with no younger siblings, looked slightly horrified at this prospect.

Last week we went to a field to see the queen visiting Shropshire along with approximately 34,996 other people.  The monsoon rain stopped for one day only.  Who knew the British weather has royalist sympathies? The children got a free day off school.  We went via an extremely crowded train.  A man standing near me in the crush,  remarked "I hadn't realised children would be let off school today". Ah yes, those pesky children - get everywhere don't they?  Little I has been brainwashed, trained like a performing dog, taught to curtsey to royalty at school.  There were big screens showing the details that we couldn't see.  Each time Little I saw the queen on the big screen she curtseyed in a very serious fashion.  I hadn't realised this was part of the national curriculum in 2012.

The monarchist propaganda continues, she came home the next day, with a book she had made.  It reads "I sor the queen. I sor the soldiers.  I like the queen.  The queen wess a qown."

Back to the sewing or lack of it....I have three half finished items on the go, including my second traveller dress in a blue linen look fabric. I really hoped to get them all done by the end of term but as that is on friday it doesn't seem at all likely to happen.   On saturday I went out to lunch for a friend's birthday.  I only took RG, so it was a kind of grown up event.  As I got ready I tried on my brown floral traveller dress. Mr Minnado said "Wear anything but that".  I was running late (of course) and didn't feel like getting into a row about what was wrong with my dress.  But it made me feel very meh about my dress.  Do any other people get that response from near ones about your sewn creations?  Do you ignore them?

For Sigrid (no sewing here)

Sigrid says write a poem, so I wrote a poem.  Well, I tried.  This poetry lark isn't easy you know.
Don't extrapolate this...I won't do EVERYTHING  Sigrid says. Honest.  I am just highly suggestible.

I am from apple trees,
dappling sunlight,
long grass in summers,
weaving, twisting.
Secret paths shaded by beech,
a hidden entrance,
stealing raspberries.
Swinging on the willow branches.
Waiting to see the wizard. 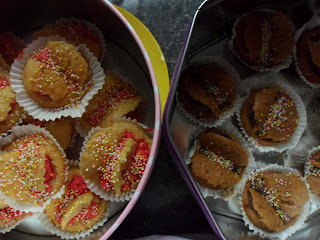 That's it, I am embarrassed now so to follow family tradition I will avoid conversation and offer food: now here, have a cake.
Or even a biscuit. 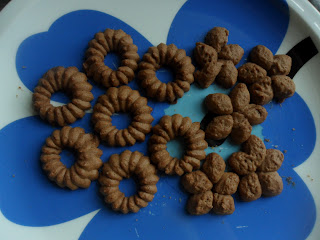 It's been a long day at the end of a long week, so I am shuffling off to have a sleep.  May I suggest you go and read Sigrid's poem?

I have been feeling really tired, fed up and sorry for myself the last few days.  But do you know what has cheered me up this morning?  Well read on...I completed my Traveller dress on friday but today was my first chance to get photos.  I started off trying to photo it in the dining room.  Ironically I have been reading a book called "Cut the Clutter" that I thrifted recently.  I have implemented some of the ideas, and have even planned a post about it.  Well, obviously not in this room. 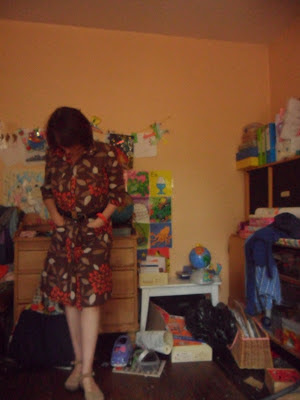 These indoor photos just weren't working due to excess clutter and poor light.  So I went outside.

Then I tried the homewares aisle.  And that's it...what cheered me up was sneaking around the supermarket photographing myself!
Oh and the dress?  I don't want to damn with faint praise but it's comfortable, and I am loving the pockets.  It's so cold here I am wearing cropped leggings under it. I made the sleeves with turned up cuffs because that just seemed better than a plain old hem.  I can't really think of much else to say about it.  But that's good cos it's an everyday dress that fits and that I can wear a lot, I don't need to witter on about it.   One problem though:  eeeeeek, I don't have an orange cardigan to wear with it.  Can I cope with that?
Posted by Minnado at 21:53 19 comments: Links to this post