Recently ...and a finished skirt 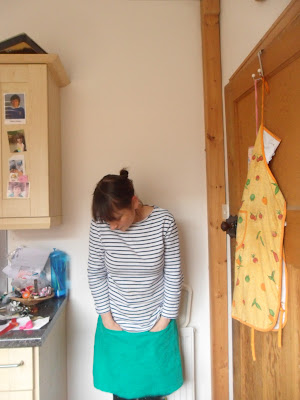 Roll up and see the unsuccessful photos! These are the best of a sorry bunch.  You will see Rocket Girl getting in the act too.  It has been school holidays for 2 weeks and one day and my attempts at recording my sewing and blogging were highly unsuccessful.  My attempts at entertaining three children of widely varying ages were slightly better.  I finished my Vogue 1247 skirt at the start of the holidays and have been wearing it a lot since then.  I was inspired by Solvi's red version . (Funnily enough Ali just posted about her Solvi jacket inspiration).   It feels very novel for me to sew a skirt that is NOT using the skirt block from the Sew U book.

Fabric: A thrifted green fine green cord fabric that cost £2.50.  I bought it from the same charity shop as my floral cord and wondered if it had come from the same person's donations.  It is a very bright emerald green.
Notions: The pattern calls for binding on the seams, I used some binding bought on ebay rather than attempt the task of self binding from corduroy.  That would be just daft, wouldn't it?  I used a thrifted green zip (cost 20p) from the same charity shop as the cord fabric. 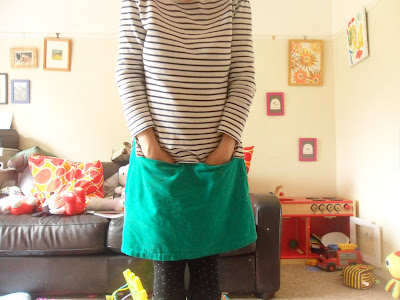 Sewing: I added about four inches in length when cutting out as I had been warned by other sewers that this skirt is short.  Then I had about a two inch hem.  The skirt went together easily, it was fun to follow a different construction method to my usual skirt making.
Verdict: I feel I have roadtested this skirt literally as I wore it to drive 200 miles with three kids and no other adults! It was comfortable for driving in and the pockets were a god-send for dropping car keys and coins into in a rush at the service station.  It gives me enough movability to run after the fast moving Rocket Girl and the bright green is cheerful.  It has withstood pizza making, playgrounds and easter egg hunts.  It is in the wash now but I plan to share picture of the inside soon.  Before I made the skirt I had thought it has one big front pocket but it in fact has two front pockets. 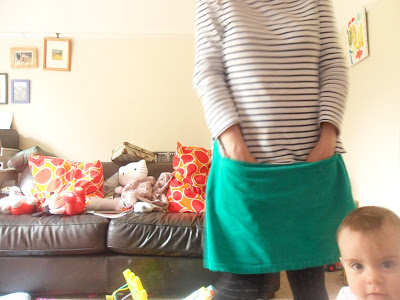 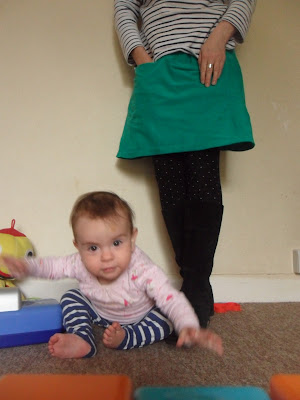 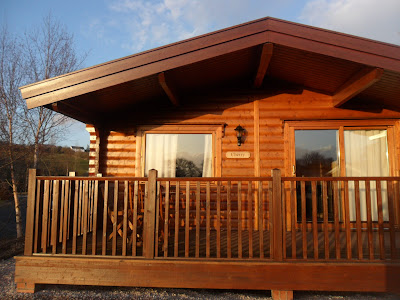 Finally, I have to show you a peep of the wooden cabin we drove all that way to stay in.  Ahhhhhhh, it was fab, fab fab.  Holidays - what a great concept.
Posted by Minnado at 21:42