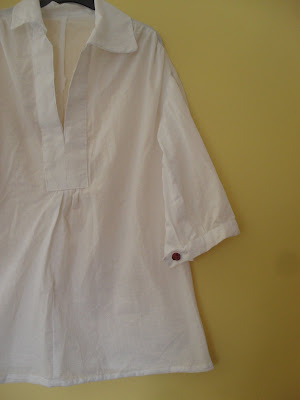 This has been a week mainly of cough, sneeze, splutter, splutter as I caught Little I's cold and cough. She was unwell for one night and croaky, but happy, for four days. I have been coughing, sneezing, and bunged up all week. The sad highlight of my week has been the opportunity to go to sleep for half an hour in the afternoons propped up on four pillows to prevent coughing while she is at preschool. So sewing has been put on one side. I even felt too crummy to read many blogs. (Yes, that bad!) I am a champion at self pity. But powered by hot lemon, paracetamol and granny naps I have a new maternity make to share, finished a week ago. It is McCalls Carefree 5921,. Roobeedoo kindly sent me this pattern from her stash a few weeks ago. (If you don't read Roobeedoo's blog, then I suggest you hop over there and have a look at some of her beautiful clothes and knitting. She dresses how I would like to dress if I only had a waist.And she can knit, as in really knit, all I can say is look at Betty Jean )

And, Roo, I really do have a belated little parcel waiting to be posted to you in thanks. It is sitting with the other overdue parcels on my table, I will post it it soon.

I like how this called McCalls Carefree. I am guessing the carefree bit relates to the ease of the pattern making-up, rather than that you will be carefree wearing these clothes. Carefree is the last thing I feel at the moment, careworn perhaps. Check out the great illustration at the top of the post, 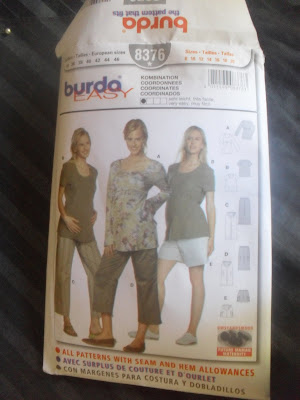 and notice how these women are very discreetly pregnant. I have been looking at a range of maternity patterns and this illustration is in contrast to the modern Burda 8376 pattern shown here where the model's bump is proudly on display. Though to be honest it is still fairly discreet. I am just curious about these illustrations and wonder if they serve to give a slightly inaccurate view of pregnant women. I have a future blog post brewing about this very subject so for now, I will get back to the sewing.

I was tempted by view E, the sleeveless red top but reminded myself winter is fast approaching and opted for view C, the long sleeved top, drinking tea. Maybe in some distant galaxy I can be that carefree pregnant tea drinker! 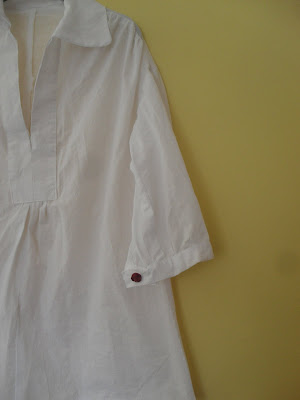 I used some white dotted cotton that I bought for £2 a metre from the Ragmarket. The shirt was much easier to put together than I expected. The finished item does make me think of something like a bucolic tv adaptation of a Thomas Hardy novel, I think it's the yoke and gathers that make that association.

I like the extended (drop?) shoulder and arm seams both of which have gathers. I also liked the gathers beneath the yoke. I used interfacing on the yoke but I wanted the collar to stay quite floppy so I left out the interfacing for the collar. 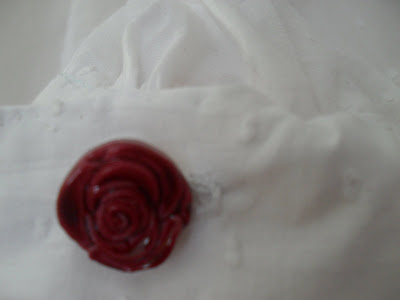 The only thing I changed was to make the sleeves three quarter length rather than full length and to add deep pink rose buttons for the cuffs.

I had a little google of this pattern and found a fab dress made here polka dot overload from the pattern. It is very inspiring...I found myself mentally searching my stash for dress options after seeing it.
Posted by Minnado at 19:48