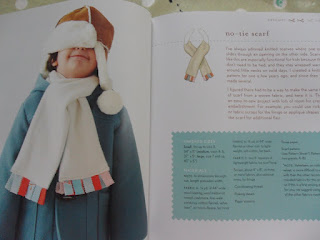 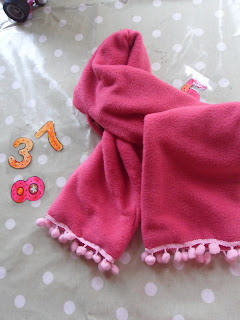 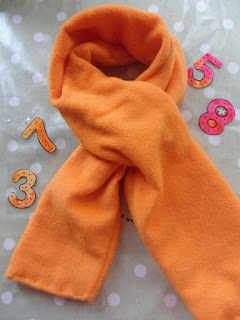 Okay so it may be slightly insane to have sewn something or even two somethings with a tiny baby in the house and while suffering sleep deprivation. But these are very simple fleece scarves with a pocket/loop thingy for easy fastening. I managed to make them last week without sewing my finger to the machine or any other such catastrophe. The need for them arose a couple of weeks ago when it had become bitterly cold and I was trying to persuade T to wear his scarf to school. His excuse was "But I can't tie it up". I was wondering about adding a looop to his existing scarf, but then I was leafing through Little Things to Sew by Liesl Gibson and my eye fell upon the no-tie scarf. Is n't that great when you realise you already have the pattern and the solution without having to buy more? The scarves require 4 pieces of fabric and are easy to make, if you had no baby in tow these scarves would probably only take 2 hours to make or even less.
I used some ebay fleece and some woven scraps for the pocket/loop bit. The book suggests using a woven fabric for the inner side of the carf but I chose to use fleece on both sides to make the scarf cosier. T's is orange and he opted for no trim. Little I's scarf has pink pompom trim as her clothing mantra is "more is more". The pocket bit is very clever and I couldn't figure out how it works till I made the scarf! That is due to my own inability to understand pattern instructions until I actually DO MAKE the pattern up, not to the instructions being unclear. I would recommend this pattern if you too want a simple no-tie scarf. I also am planning to make some more One Day as presents.
I am pleased with the finished scarves and T said I was "amazing" so I felt a brief glow of maternal satisfaction knowing the children had warm necks! That didn't last, T didn't think I was quite so amazing when I made him stop playing computer games and tidy the room instead (tee hee). And Little I loves her scarf but later told me I had "ruined my day" by making her eat her supper at the table, oh and washing her hair! (I know, my cruelty knows no bounds).
Posted by Minnado at 18:41