By this title I mean, drowning in the sea of chaos, not actual water.
I was tempted to title this post "Help!"  -  I have been feeling a lot more overburdened recently with various things.   I have found myself shouting and being grumpy.  I am trying to make a concerted effort not to be so grouchy and not to shout but, you know what?  It's hard somedays.

So here's what I have done to alleviate shouting...and get organised.  So far.  It's a work in progress.

Using a  suggestion from the book "Organized Home" , I created a "launch pad"* for T and one for Little I.  They are only plastic trugs but in them goes anything for school.  At the end of the day they put their school bags in them.  When there are letters to return, musical instruments, wellies, whatever I put them in the launch pad.  This was partly clear the space in our hallway with stuff dropped anywhere and to stop having that awful panic at the last minute when something has been forgotten or misplaced.  This worked well till we hit the drawback.  The drawback is...a very cute drawback...but one who is now trying to pull herself up to standing and plastic trugs do not support that weight.  She also is putting EVERYTHING in her mouth so I have to find a new home for the launch pads. 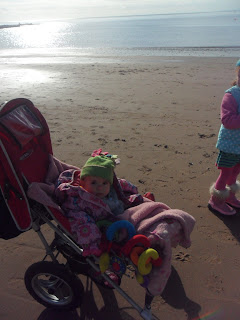 2.  In the summer I bought a charity shop rack and used it as rack for shoes near the front door.  No more shoes scattered across the house.  No more shouting "I don't know where my shoes are"  Result!  A few weeks ao I just had to move the rack of baby's reach as she was pulling herself up on it and eating shoes (mmmm...tasty).  So it has a new home by the kitchen back door.

3.  I made weekly wall planners for T and Little I.  T is a scatterbrain, a total scatterbrain and I am trying to train him for taking more responsibility before going up to senior school in two years time.  I looked online for a weekely planner template then was struck by the idea of just drawing out my own.  T was so happy because I drew Yoshi on his.  "You were born to draw Yoshi, Mum" (I have now found the reason for my existence....to draw Yoshi.  I am soooooo glad I have cleared up that question).

* Try telling a logical thinking five year old that l'aunch pad' is a metaphor for launching them into their day, "no, it's not for a rocket, no, really nothing to do with rockets"....she looked at me as if I were insane.
Any more organisational tips?  Or shall I just quit now and lie down in my own chaos?
Posted by Minnado at 01:56