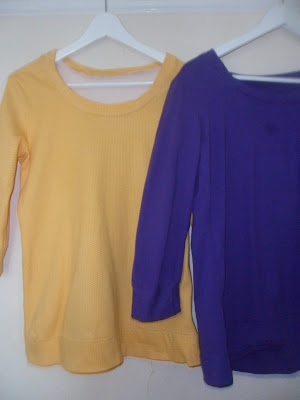 Warning: this post contains sloppy slobby sewing errors and poor photography.  What would be the collective noun for Renfrews?  A clutch of renfrews, a stitch of renfrews?  I don't know what it could be.
Any suggestions?
In line with my sewing plans I completed my purple Renfrew a few weeks ago. I cut it out before Christmas and then went back to it in January.   It sewed up really quickly.  The purple fabric was a gift from the lovely Scruffybadger via Birmingham Rag Market.  I am guessing it came from the stallholder whose byline is "Best Marks and Spencer fabric".
Then I got a bit carried away and made a second Renfrew.  This was enabled by Tors who had  mentioned the Backstitch sale.  I looked and found yellow polka dot cotton jesey from Oliver + S, half price.  I bought it as I find it very hard to find good quality jersey fabric.  Well, that's my excuse, and I am sticking with it.  This impulse online buying is dan-ger-ous!

I cut out short sleeves on the yellow top, having cut the purple one with full length sleeves which proved too long for me so I chopped them shorter.  Those long  sleeves are loooooong.  Like Donna, I think I will go down a size next time.  I don't like clinging tops but the neckline is a bit too big.

﻿ ﻿﻿
So now time to 'fess up.  The purple Renfrew may look okay hanging up in the picture but when cutting it out I made such a rookie error.  I was rushing the cutting out, of course, trying to complete it before RG woke up.  When laying out and cutting the back piece I stupidly laid it so the two sides of the folded piece of fabric didn't match up and upon opening up the back piece realised a chunk of one shoulder simply wasn't there.  I didn't have enough fabric to cut the back out again so I opted for the slobby sewing route and simply sewed up the shirt with a big hole on the back beneath the shoulder seam.  Then when it was finished, I er, er, slobbily I know, I just wore it with a big old hole in it and made sure it was always covered by a cardigan.  This worked fine till I got hot one day!  Slowly my sewing pride took precedence and I decided to act.

I had a very small piece of a lovely vintage pink nautical fabric
in my stash.  I t came from my bin bags of fabric a couple of years ago.  I used it to make shoulder patches, squared on the back and curved on the front.  I think the pink and purple colours really sing together and I am much happier with my non holey Renfrew.  I think it is brighter and prettier now with shoulder patches than it was before.
﻿
﻿﻿﻿ ﻿
﻿﻿﻿

So, if there is a moral to this story, it would be that it doesn't matter if you make a mistake.  It's what you do afterwards to fix the mistake that counts.  Anyone else made a mistake into something good?
Posted by Minnado at 01:27