I have had various denim jeans jackets over the years and wound up with none last year.  I had a second hand one lined with wool fabric when I was eighteen.  It was from a vintage store before vintage was fashionable. It had a cord collar and elbow patches.  I don't know what happened to it.  Then I had a pale dusty pink (yes, pink) collarless cropped jacket from Jigsaw in my early twenties and a very dark fitted denim jacket in my late twenties. I used to love wearing it with wide trousers. I think both of those jackets went in clothes clear outs.  After I had RG I found a Gap jeans jacket in a charity shop and wore it for a few months but it was too big.  So after I bought 3 and half metres of denim last year the thought percolated that I could just try making my own jacket. I looked through all my stash patterns but I couldn't find any pattern I wanted to use.  I wanted to make a traditinal style jeans jacket.  The Burda 7018 jacket seemed to fit my requirements.

I started making this denim jacket in June and finished it in November.  It was a stop start project which lost momentum several times.  This post has been stop start in writing too, so I thought I'd organise it with subheadings to stop me getting too muddled.
Fabric

I used denim that I bought at a scrapstore.  I bought three and half metres end of roll for £9 .  I had already used the denim to make a Vogue 1247 skirt.

This was the first Burda pattern I have sewn.  The pattern itself is not very complicated.  It has princess seam type front and a yoked back. The sleeves are sewn in two pieces with a cuff.  The instructions are fairly brief but they are okay.  I cut a straight UK size 12.
My only addition was to put in front pockets.  I just knew I wouldn't wear a pocketless jacket very much.  I used a small piece of cotton from my stash for the pockets.  I used the same fabric to be the underside of the fake pocket flaps and the underside of the collar.  I did this to avoid too much bulkiness. 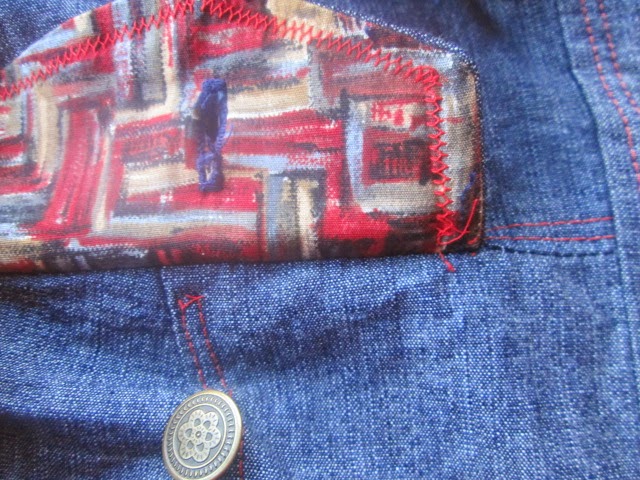 At the start of the project I was enjoying the topstitching.  Then, the novelty wore off and I got so fed up with it, especially once I broke the twin needles and had to go buy more.  There was a lot of topstitching in this jacket.   It would be a good project to work on two machines as Sonja describes.  One threaded for topstitching and one for construction stitching.  As I only  had the one machine I veered away slightly from the instructions trying to do as much topstitching in each session before rethreading for construction stitching.
The jacket went together pretty easily but then I went wrong on the sleeve construction...in such a stupid way.  The sleeves are constructed from two pieces.  As the denim I was using has no obvious wrong side I managed to sew two identical sleeves instead of mirror images.  Both would fit in the left side but on the right side it would have the back seam on the front of the sleeve.

This called for a lot of unpicking of topstitching and seam.  Accompanied by much swearing, huffing and puffing. The sleeves were also really long...I had to trim them by three inches before adding the cuff bands.  Grrr...I really will measure the sleeve pattern pieces if I ever make another long sleeved garment.
So maybe I have little short arms.
What would I change or do differently?
I don't know if I would make this again as I really don't need more than one denim jacket. Unless of course I tripped over a piece of mustard denim one day while walking down the road. Well if that happened, then I would consider making this as a lined jacket.  Lining is just so...well, so nice to have as a finish on a garment.
I have a small sneaking feeling that the collar is slightly too big,  I would also try and make the cuffs as proper buttoned cuffs.  In this pattern the are really just bands.

Costs: The denim was £9 originally and this has been used for the jacket and a skirt.  So I would say £4.50 fabric cost.
I bought the jeans buttons, at £3.74
Thread - I had to buy red topstiching threads and new twin needles. I think I bought three reels of the red  thread. 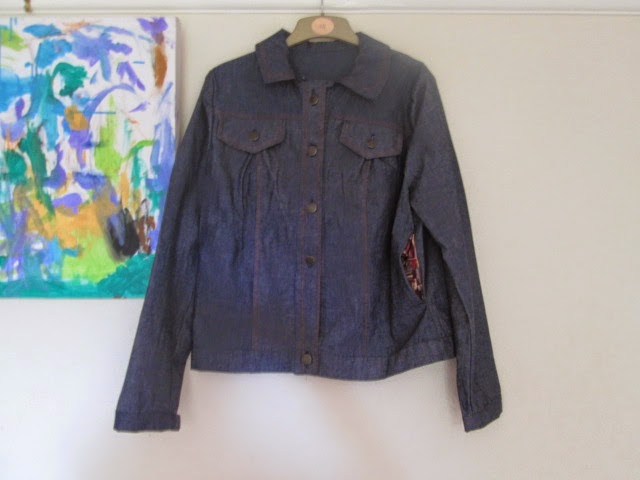 Thoughts
In the past a denim jeans jacket in my mind would always be something you had to buy, not make.  Actually planning to sew one and checking out details on RTW jackets was a lot of fun.  As it is an unlined, loosely fitted jacket I think it is simpler to sew than I had thought.


The fact that it is lots of small stages of construction lends itself to someone like me who can only sew in small amounts of time.  The Young Burda pattern is simple and easy to follow but you could add to it to make it more complicated.  I am looking forward to warmer weather so I can wear the jacket and I have definitely been converted to jacket sewing....I am thinking of returning to my past plans to make a lined parka.  I was all set to make it but life happened and those plans got shelved.  I just have three or so items in the queue first.