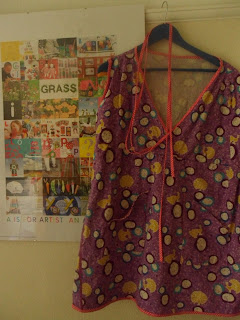 T in his infinite wisdom said to me last week as I pranced around the house in my new tunic, "It seems to me, Mummy, that you are obsessed with making dresses".  I stuttered and racked my brain for a reply other than "Yes, son you are right."   Then he took a look: "Peacocks? Sitting on eggs?"  For the highly logical person that he is, this was maybe too much, a nonsensical step too far.
﻿﻿But as other bloggers have noticed there is a siren lure to the novelty print and every now and then we give in.  See Jessica's dress (I still want it) Scruffybadger's recent dalliance in elephants, plus her previous Brighton Pavilions tunic but cannot find a link to it (I still want it).  I could continue...but no, lets get down to looking at the tunic.  I bought the echino linen in

M is for Make's January sale, I think I was in a post natal hormonal haze my mind thinking something like "I just had a baby.... I deserve some pretty fabric bought brand new to reward me for giving birth".

﻿﻿﻿I bought 2 metres, I really should have bought 3 metres, as I only just managed to squeeze the tunic out of the fabric, partly because I initially cut the back bodice out upside down so had to recut it - that meant not enough fabric left for sleeves.  I used the Mariposa pattern from Anna Maria Horner's  Handmade Beginings again as I wanted a tunic or dress that I could easily feed Rocket Girl in.  (I keep looking at pretty dress patterns and mentally divide them into ones I can feed the baby in while out and about and ones I cannot.)  I made the non-maternity version of the Mariposa this time and omitted the facing and modesty panel.  I also omitted the self fabric ties due to lack of fabric.  Instead I used some ready made pink polka dot bias binding to edge the bodice and extended it into ties.  I also edged the armholes and as I had a relatively short skirt I used the bias binding on the hem too.    I had enough fabric left to make two slanted patch pockets which are lined in some cheap gingham polycotton.  I didn't have enough fabric to try and match the pattern with the pockets.  I don't know why but the shoulder pleat on this pattern is a small detail that makes me smile.  I had intended doing some outfit pics today in the tunic but guess what?  Little I has got up this morning with chicken pox! Two weeks and two days after her baby sister came out in spots.  So I am a bit preoccupied today as she is lying on the sofa demanding food and entertainment.

Once I had finished the tunic on I was struck by the fact that I have in fact made a Mrs Overall costume.  Oops.
Just need to accessorise it with rubber gloves and hair rollers.