A den and gloomy day 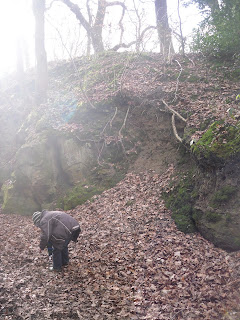 It is half term holiday here so while I have been working on my Stashbustin' honest, but have been distracted and out and about, walking in the woods, building a den under the dining table. The den used a large piece of camoflauge cotton fabric , so it is stash bustin in a way (with parcel tape not thread!) but it is too dark here to today to photograph. (It's snowing again this afternoon) The camo fabric came to me via Freecycle and is kind of awful if you are thinking of sewing clothes but it is fab if you have an almost seven year old boy! 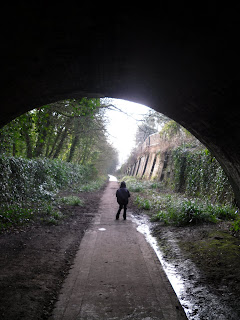 I enjoyed reading Zoe's post this week . I agree that it is liberating to give up buying mass produced clothes and to stop shopping so much. We are such a consumer driven society where shopping is one of our top leisure activities and it seems to me that there is something in the zeitgeist in blogland rejecting this right now. (Love that word, zeitgeist!) I have been thinking a lot about how we as a family seem to have so much stuff - since becoming parents, Mr Minnado have been amazed by how much stuff our kids get given. When T was a baby I can remember all his toys fitted in to one carrier bag - now our house is awash with toys, and yet compared to some houses we go to we don't have AS MUCH STUFF! I try and give a few things away every now and then, but still things keep coming. My family tend to give one present to each child for a birthday but my in laws like to give a big sackful - this has led to tension in the past and we have T's 7th birthday coming up soon....just to add to my rant he won the school raffle top prize at Christmas and I was torn between being pleased for him and being appalled at it. It was a huge basket filled with toys, sweets, one book and a dvd. There was more there that I would give him at Christmas myself! I couldn't understand why they didn't giveout 8 or 12 prizes to different children rather than have one child win the lot. There were some lovely things in it - his favourite being an aquabead craft set and a remote control car! But it just highlighted to me how out of touch I seem to be with other parents who think this is okay. We did divide the basket up infact , as there were several pink girly things that went to a couple of friends with girls. T gave his sister the cuddly toy and they have both used the craft sets.
Anyway, I have managed to put half a dozen pieces of clothes on Ebay this week, and filled a bag for the charity shop. And am workign on several stash bustin projects...need to stop typing and get sewing to finish!
Posted by Minnado at 02:13