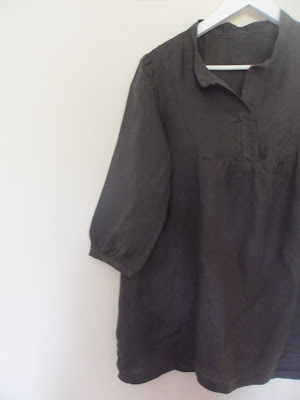 I was thinking about Tovas for about a year - then when the pattern was released as a pdf  last year, I bought it.  I planned to make a tova for so long it was almost anti climatic once I did.  I printed the pdf off,carefully filed it away.  So carefully that when I finally came to make it I couldn't find my print out so had to begin again.  I finished my first tova blouse in March.  I used some dark grey linen or linen blend from my mum's stash.  My mum is unwell and can no longer sew.  She was a formidably talented quiltmaker and since the late 1980s that was her passion.  But, before that she also used to do dressmaking, knitting and lacemaking.  Slowly, very slowly, each time I visit,  I have been dismantling some of her stash, accrued over twenty years.  I give some away to other sewers, donate some to charity and keep some to work with.  I have a rule though that I have to USE these fabrics.  I cannot bear to unearth one stash only to fill up another of my own. 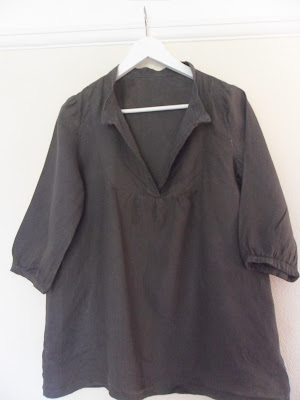 It is an emotionally draining chore at times.  But also a chore that yields hidden treasures.  Like this lovely dark grey fabric.  It is a lovely weight and hangs well.

There was only enough fabric to make the blouse not a dress version.  The pattern went together straightforwardly.  I followed the instructions mostly.  I have worn the top a lot but find it really frustratingly hard to get a decent photo. 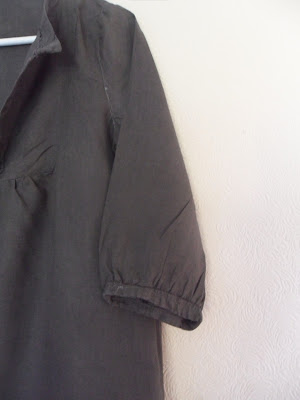 The fabric creases a lot during the day and it is tricky to photo dark colours.  The one adjustment I would like to make to the blouse is adding a couple of buttons to the placket.  I wear it over a cami or vest currently as I don't like too much chest on show, plus the flappiness kind of irritates me.

Almost straight after finishing Tova no.1, I made a second.  This time in a white polycotton with little flowers on.  This came from my friend's clear out of her 93 year old mum's stash!  It had sat in my stash for a year...time to move it on.


The problem I have with this is it is almost transparent fabric, so has to have a cami underneath and I have no pretty pale ones.  And I feel it looks a bit like a nightie on me.

But it is a nice summery blouse for those not-too warm/not-too-cold days we seem to have a lot of.  Once again I plan to put a button or two on the placket, just waiting for the right button inspiration to hit me.
﻿﻿ 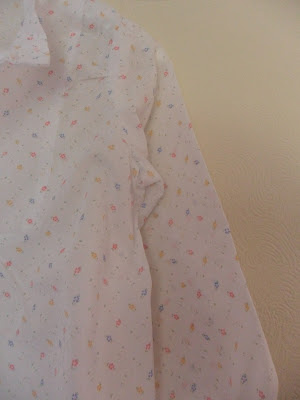