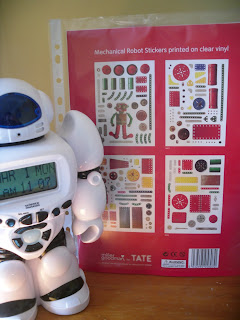 After a an enforced break due to our computer giving up the ghost I am back online - yippee! W have been having lots of fun here with these stickers from the Tate Gallery shop

I bought them for my son's age 7 birthday.
They consist of lots of components for building robots or machines, including some really tiny bolts and rusty looking wheels.. Here you can see the first machine that T built on his window. 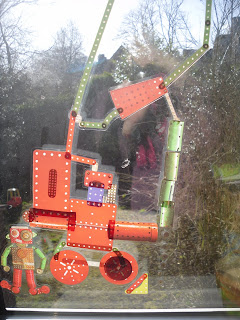 The unexpected thing about them is how much his little sister (age almost three) likes then, "Come on" she says" Let's play little robots" and off we go, me sticking them on the wall, her barking out commands, "Make car, make house, need eyebrows" in that bossy way that almost three year olds have. 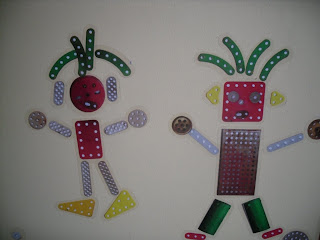 When not following my leader and sticking robot stickers on walls I have been struggling with a seemingly simple dress pattern, Simplicity 3835 - I made the top version of this recently as described in the last post and it was a breeze to make. Then emboldened by this I decided to make a dress using my hoarded Amy Butler fabric and using the 3835 version with a neckband and back zip. Somehow I am so cack handed that this went very wrong - the first neckband was too high and too tight for my liking - so I cut a longer one and also made it narrower so the neckline was lower - I put the zip in - didn't like it - took it out. I still found the neck too tight and my gathering was so awful that the fabric lay in a bunchy messy way in the front, so this morning I took the second neckband off, took out the gathering stitches, sewed up the back seam, and put elastic in as I did for the top. Phew...this was much better - I will post pics when I have hemmed this beauty. I am determined to finish this dress and have it as a wearable item - not a screwed up, crumpled abandoned project. However, this has brought home to me that fact that if only I had made a toile first....ah yes, hindsight is a wonderful thing! I did think about it but decided not too - okay, now I vow that the next new pattern I try, I will do a toile first! Sometimes I have to learn things the hard way for them to really resonate and stick in my brain! I was glad this morning to start making a simple wrap dress for my little daughter (AKA She who must be obeyed) - no gathering, no zips, aahh, nice and simple. Will post more about that later too - it is using my fabric from Zoe's fabric swap.
It has made me think - I was trying to slowly sew more complicated things, trying to build and learn new skills - but am I too clumsy to do any thing more complicated than elasticated necklines? I hope not.
This totally unrelated photo shows what we did a couple of weekends ago - T came home from school saying he had homework to make a mask of a character from The Gruffalo, "Don't you want to be an owl?" I said, envisioning a simple owl/feather mask, a few choice bits of felt...however he wanted to make a fox mask so here it is - made out of cardboard and super glue, painted and varnished with PVA. He could just about see through the eyeholes! 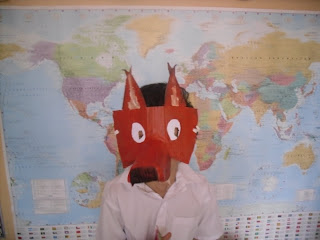