The perils of having an old sewing machine

The past week I have felt a bit as if I were watching the outside world through the wrong end of binoculars....two sick kids followed by snow and ice has meant I have hardly been anywhere, seen anyone and the Christmas shopping has just had to stop. 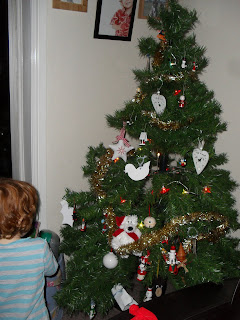 Last week was odd as they both slept during the day and in the strangely peaceful house I was able to finish my skirt and the cowl scarf in the previous post.
My sewing machine (a 1970s Elna) had not been working properly for some time but with the unexpected time I had, I was able to get a look at it. I had previously joined the Yahoo group Elna Heirloom Sewing upon a suggestion from Sigrid at Analog Me. I found that my machine (a lotus) is not a common model in the group discussions and advice and I didn't get very far. But the group discussions showed me how many people out theere are fixing their own vintage machines, and reading the discussions gave me the confidence to have a look at the machine myself, rather than trek over to the repair shop.

I got it to work by carefully cleaning out the bobbin mechanism with a paintbrush. Previous to this, the bobbin kept sticking and then the needle would unthread and I would have a jam of threads coming from the bobbin. It worked and the machine started to run smoothly.
I was able to sew the facings and the piping onto the skirt. Then a couple of days later I tried to sew the seams - I had to repeat the cleaning process before the machine would work. Ah, the joy of an old machine... 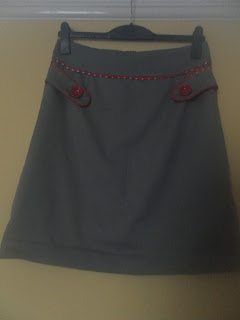 In the meantime here is the skirt, with apologies for the poor photo quality. I left my camera in the car, and the cold seems to have affected it. I used the Sew U skirt pattern and added the facing to the outside so I could have the piping effect. I was tempted to put in side pockets but didn't want to spoil the line. 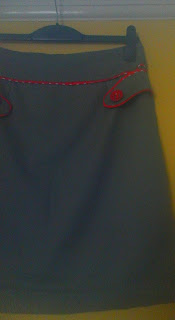 The fabric is the greenish-grey I bought to make these trousers The binding is from some red and white polka dot fabric and I had the shiny red buttons in my button box.
I am hoping this skirt will be versatile enough to wear in lots of combinations. It was sooooo nice to sew a garment after not sewing any since September. It made me realise how much I love making clothes. I am working on my sewing plans for next year in my head.
My children are now much better but they have kindly given me their sneezing, coughs and temperature, so once I am better I can get outside and get some better skirt photos but I am too impatient to wait till then and wanted to show it now.
Posted by Minnado at 00:52