More sewing for others 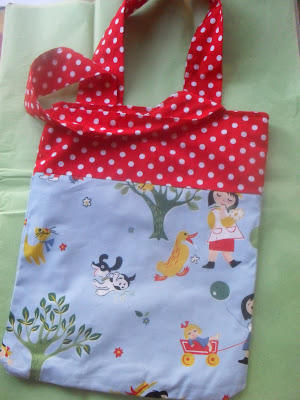 A birthday tee shirt for Little I's friend whose favourite colour is green and a bag for her to keep treasures in. 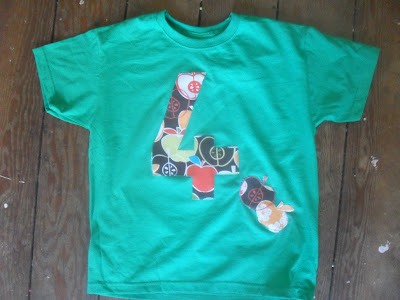 The teeshirt I did at the last minute, well an hour before the party. A new sewing shop opened near me and I really wanted to like it. I live in a sewing shop desert. The owner was lovely and helpful BUT she sold me fusible interfacing that was ironable-fusible on one side when I had asked for fusible on 2 sides- bondaweb type stuff. Eeeek.

I didn't have time to go back and change it before the party, and so I just used the interfacing for the tee shirt applique. I think it is going to fray more now though than it would have done with the double sided stuff.

The new shop is five minutes drive from my house, located on the edge of a small industrial estate, and has loads of patterns and fabrics and a bit of haberdashery. There were lots of useful lining fabric (I bought some grey for a skirt I am in the middle of making) and some pretty floral cottons (didn't buy any, thinking of the stash I already have). There was quite a bit of fabric that was not my kind of taste but which made Little I gasp and say things like
" Ooohh, look shiny rainbow, glittery,stars material...ooohh pink princesses material....! " (Can you imagine a world styled by four year old girls?)

I did buy a length of fake suede in emerald green and some brown fake suede off cuts. Don't worry, this is not the latest FESA wardrobe plan. Nor am I going to the Birmingham Bloggers meet up in fancy dress. I'm making T a Robin Hood costume for friday night's cub camp. We googled Robin Hood costumes (found a strange flickr group devoted to men who like to dress up as Robin Hood, let's just not go any further) and found a simple one that met with T's approval (he is not keen on dressing up) so I am spending my sewing time making it now. It is basically a tunic to wear over his normal khaki green trousers - no way this boy would wear green tights! But I have had a request for a pointy hat as well.

We only had one week's notice about the costume which is a little short don't you think?? T is very excited as this one night and one day camp is his first cub camp. I can't believe he is old enough and brave enough to go. I may cry into my cocoa on friday night - this is my just desserts as before I had children I used to be so unsentimental and laugh at soft-hearted parents.
Posted by Minnado at 18:39