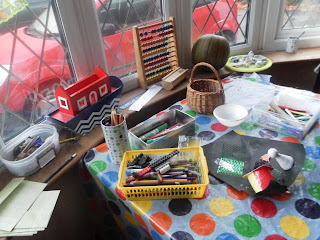 See the chaos - no room to eat at the table. 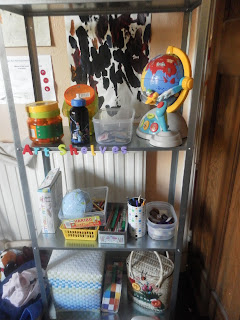 Pens, pencils, art straws, playdough, magnetic letters, talking globe...see they all fit!
When trying to practice mindful spending and not buying new things I have found that patience can be rewarded. I have been wishing to have some shelves for a long long time. I wanted to stick to my guns and buy second hand but I was getting fed up. Shelves offered on my local freecycle network get snapped up very very quickly.
I had even started to look at Ikea's website, and asking other people where their shelving came from. In short I was becoming an obsessive, shelving wannabee-bore. Mr Minnado doesn't like shelves. Really, really does not like shelves. When I suggest shelves in our new house that we are planning, he adds quickly "But wouldn't you like a door over them?" i.e. a cupboard. (But I would like a shelf in the kitchen to put some of my pottery pieces on.)
Due to his shelf hatred (yes, that is shelf not self) and my lack of funds we have had more things on the floor and the dining table than I would like. When he trips over a box of pens and swears, I suggest this would not happen if we had some shelves. But at last....having restrained myself from buying some new shelves from a shop... I got lucky... the local junky charity shop was closing selling off their ikea shelf units. I asked if I could buy two units for £6.00 each. Mr Minnado was slightly petrubed when we had a phone call at 9pm one evening from a gruff voiced man, "It's Dave from the charity shop". He had rung to tell me I could have the shelves. (When the local charity shop rings you at home, is that a warning that maybe you are doing too much second hand shopping?) So, I had to collect them this morning and it all turned into an epic task. I was on my own with the children and realised I could not fit children and shelves into my small car at the same time. So we walked, I had to carry each shelf unit home in turn while T pushed Little I in the pushchair.
I have put one set in the dining room as you can see above. The other set are ina kind of utility space we have which is very dark and didn't photo well. The bonus of it is that I was able to decant loads of stuff from the top of the fridge onto the shelves. In doing so I discovered,

T used the magnetic letters to label the shelves as you can see in the top picture. I hadn't realised they were magnetic. As usual my seven year old knows more than me.

The point of this lengthy ramble about shelves is partly this, Hayley has written about containers before and the idea that you should only have stuff that you can fit into containers. When you have a container full of stuff, for instance a cupboard full of dried foods or a jewellery stand full of jewellery, that is it - you have enough.

By getting these shelves, which I would consider containers of a sort, I not only tidied up but I found things that I had forgotten we even had. I had been planning on going to buy more paints and glitter. Having them organised and easy to see means we can use them more often as well as saving me from buying things I already have. We have enough!